Some amazing facts related to Ladyboys In Thailand | Third gender origins, beyond myths ! What does this mean? There are some curious, as well fascinating stories related to transgender population in this country, which explains somehow their existence and much more.

And if you are a ladyboy lover like me, interested in encountering Thai Ladyboys one day, or any trans woman from Asia, it becomes a topic quite interesting.

For example, have you heard that Thailand, the so-called Land of The Smile is also known as the Ladyboys’ Kingdom? Sounds funny? Well, for the record, this country is under Monarchic government 🙂 ( they have the King ).

How has this country gained this title then? The answer brings another frequent question that will lead into the deep of this topic.

Why are there so many ladyboys in Thailand and Asia?

For a short answer, It is due to a  more tolerating of different sexual orientation and gender identities in Thai society. Whereas in western societies still gay people or transsexuals have to hide themselves being afraid of the homophobic episodes and bully gangs. Discriminations cases that you know or seen in the west countries In South-East Asia are a rare phenomenon. Then, there are more people who “comes out” ( in the LGBT lingo ) and do not hide.

How ladyboys and LGBT obtained this freedom?

In the case of Thailand, the answer lies in religious belief and legends. The origins of Thai Ladyboys, and what has generated the so-called ideal of the third gender in recent years. This is what also explains, partially, why are there some many transsexuals, aka Ladyboys in Thailand and the third gender or third sex

Besides, you should know that In Asia there are other countries such. Where you may see a similar scenario, one of those are the Philippines Islands. Though, their religious influence applies the opposite result. Quite a controversy, isn’t it?

The tolerating attitude and respectful manners to ladyboys in Thailand find its roots on the following tale. More than 80% Thai population practice the Buddhism religion, the explanation of the existence of ladyboys lies in Buddhist cult. Even though most ladyboys believe it, to some ladyboys this is just a legend.

The religious cult explains their existence trough the “rebirth.” Let’s see how in details…

The legend of Thai ladyboys and Buddhism influence 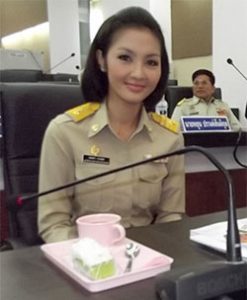 For example, at the contrary of the Christian Catholic Religion, which professes the rebirth in abstract – ideal place ( the Paradise ), Buddhism declare the reincarnation. Which means, you will experience rebirth on the earth. According to following beliefs, ladyboys are reborn in this ambiguous / androgyny life form, as transsexual, to expire their guilt from a previous life. This is considered a divine punishment. Then, for Thai people believers, inspire compassion and respect for ladyboys. Besides, the new life is up to repair their earlier mistakes and evolve into a better person. As result, Ladyboys who believe, being aware to be paying for their previous mistakes, do their best to live this new opportunity with more respect for them self and surrounding people.

Ladyboys in Thailand the third gender and third sex

That’s how along the time Thai people has developed this culture of tolerance and respect for transgender people.  Since Buddhism is the most practiced religion in the most Asian country, its influenced has expanded to the rest of continent.

Famous singer and radio Dj in Thailand, Belle Nuntita is among the most successful transgender singers of the world.

This is what has generated for Asian transsexual, better known as  Ladyboys, the label identified as the third gender. Something that breaks the binary heteronormative, which the world is used to. Ladyboys being considered a hybrid between a man and woman, that stands into the middle, find references to pansexual orientation or simply, pansexuality.

The Buddhist cult, beyond this myth, also educate to respect for every life form. This is probably the most influence for what concern the respect for population and diversity as the case for transgender people. Then, it doesn’t matter your sexual preferences and orientation.

Of course, this is not the only explanation for ladyboys existence and integration in Asian society and Thai. Thanks to advanced technologies and new scientific discovering we have more rational explanations today. The world is in constant evolution, moving to a more scientific point of view, and disbanding old beliefs and myths. Despite the acceptance of the third gender, transgenders are not recognized yet concerning laws in Thailand.

However, the religious influence, in this case, is not damaging transsexual population with the same stigmas in west society. In this sense, we can say that in these lands are a step ahead regarding respect for diversity and minority.

The so-called Transphobia is not part of this culture, neither religion, not even people with more modern certainty. Despite the fact Thai ladyboys are still not recognized and supported in terms of laws, Thai population is not against the freedom for transgender people. This is what makes such example this country.

Indeed, for some people the idea to apply the same tolerating culture of third sex / gender like in Thailand here on the west side is utopia. But if we look years back, 20-30 years ago or more, seemed to be impossible accepting gay people. Nowadays gay rights are better recognized, and gay people accepted in western society. Unfortunately being transsexual is still seen as something deviant, fetish… sickness… ( in future I will write a dedicated article on this matter).

Let me ask you this: Is begin gay a choice? I bet the first answer you give yourself is wrong. So let me ask you this now:  When did you choose to be straight? Try to answer yourself again this question, and I’m confident you will start to understand better how the world goes round for some people. As well as many LGBT people ( lesbo, gay, bi-sexual, transgender ), they are born this way. It is not a choice.

Some time ago,  has been announced the discovery of  ” Gay Gene .” A discovering that could explain the origins of LGBTQ population. Unfortunately, this is making people consider different gender identities and sexual orientations as sickness. By my side, I rather considering all of this a simple adjustment / trade-off of nature if we want to consider this explanation.

Sure I’m not a geneticist, neither a medic researcher, but science and religion are trying to explain the diversity that exists since the dawn of times! Since the year zero and known before. In the ancient Greece-Roman culture, was common to have the so-called “buddy” in the ranks of erudite ( intellectual ) society and not only… Right to mention a famous case… A subject that fits pretty well, in this case, is the greatest captain / leader of all times: Alexander The Great ( Magnus in Latin )